The Louise McKinney Riverfront Park, is named after the first woman to be elected to Alberta's Legislature, the first woman in any legislature in Canada or the British Empire. She was elected in 1917 and "believed in temperance education, stronger liquor control, women's property rights and the Dower Act".

As the name suggests, this park is on the banks of the North Saskatchewan River. It starts at the top of the bank however and that means stairs....lots and lots and lots of stairs. In spite of all this it is handicap accessible. If you are fortunate enough to see the parking lot on the way up the hill (or know that it is there), you are able to eliminate an entire series of stairs (the large & top right photos) and are then at the point that paved paths begin. 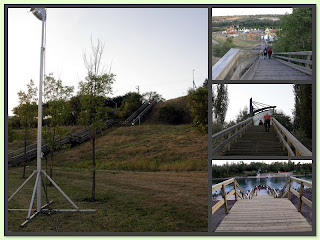 The city is also in the process of improving McKinney park, they have put in paved paths, more stairs to the river bank, a stage area and there will be room for permanent concessions. There are plans to put in a funicular lift as well. The park itself is home also to a Chinese garden with beautiful statuary that is dedicated to the Chinese immigrants that helped to build Edmonton. As you can see the lights have yet to be installed and a few other things are not quite completed. 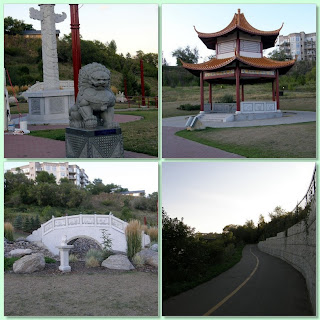 The Dragon Boat Festival is one of the regular events held at this park and it was this weekend! 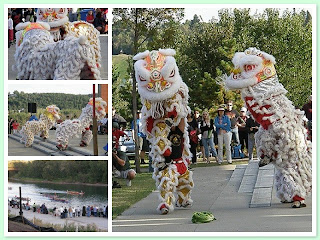 We attended the opening ceremonies and watched Lion Dances by the Borneo Lion Dancers and then we traipsed down three more set of stairs to the river to see the traditional Blessing of the boats. 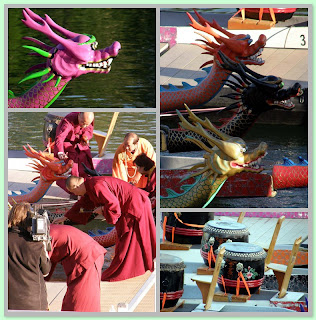 We watched a few of the initial races before calling it a day and heading back up those ... stairs.

My Town Monday is the brainchild of Travis Erwin. To read other entries just visit click here.

To see more photos of the park and dragon boats, you can go to my Flickr site.

Have a good day all.

This is wonderful. Your pictures are incredible, filled with action. I can climb those stairs. I can dance with the lions!!

Thanks Sis! Those stairs darn near killed me!

Terrie, thanks so much. I'd rather dance with lions than climb those stairs ever again!

Jay, thanks. Yes, the boats are lovely.

Well, come by and check out my last post for the mystery trip! A bit late but better late than never I say! LOL!
Many hugs!

wow, what a bunch of pics!

Damn fine look at the park and the races, Reb. Well done. Good thing those stairs can be largely avoided.

What a beautiful park! Thanks for sharing the great photos!

Even if it's not completely done, it looks just charming. Thanks for sharing!

This just goes to show that you can find the unexpected in every town and that is one of the things I've enjoyed most about MTMs.

What wonderful park and a great event to take in. It would be cool to take a ride in one of the dragon boats!

Your town sounds wonderful, Reb. I'd love the challenge of the stairs, and the Dragon Boat Festival seems incredible. thanks.

Those Japanese touches are exquisite.

I love the dragon boats, my son's school take part in these races.
I love that its handicapped accessible.

Thanks Robyn, it is cool!

Thanks Leah! Unfortunately we had to climb all the stairs!

Thanks Mary. I have to go back when it's done and get some better photos.

Thanks Clare. I plan to go back when it's done and get some better photos.

Travis, that is so true.

David, thanks. I think in order to get a ride in one, you have to do some of the work ;)

Thanks Debra! I should make those stairs a goal...to be able to climb them all without feeling like my heart is going to explode.

Reb, this is a nice improvement to Edmonton. More parks are always a good idea to get people out and about. But stairs, gosh, my knees would complain bitterly. Thank goodness for those paved areas.

Nice post. Now I want to go back for a visit.

Reading this post made me miss Golden Gate Park in San Fran. Sounds like a beautiful park. Love the thought of all those stairs!

Barbara, thanks. Yes, the stairs were a lot to climb, but the views are great.

Thanks Hilary, glad you liked it.

Hebba,thanks. Stairs are not my forte, so I'll leave the climbing to you okay?

That is cool!
Thanks for stopping by!

Reb
Edmonton, Alberta, Canada
I live a pretty boring life in a small apartment in a fairly big city. I like to take pictures and pictures are meant to be shared.

My cancer journey - in brief